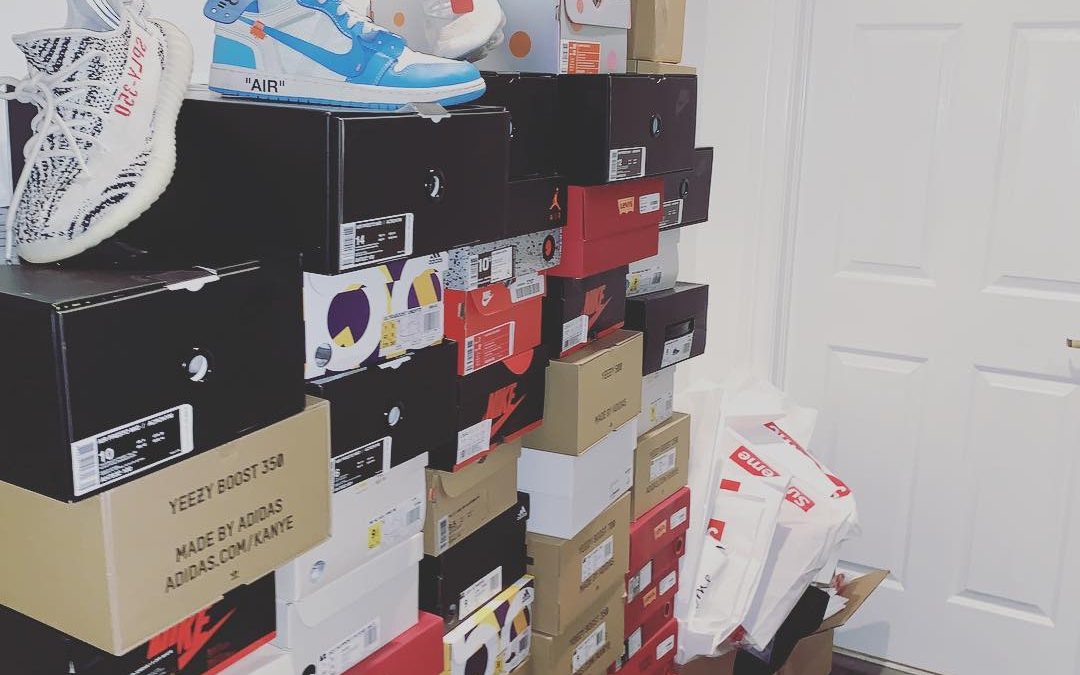 $50 and a burning passion of money and hard work.

That’s all it took for me, a 15 year old kid to start making over $10,000 every month, solely through sneakers and hyped items.

My name is Ethan Cohen, and this is my story.

I don’t care about sneakers. Sure, my closet is ONLY hyped and luxury items, but to me, sneakers are not a necessity. If this enterprise happened to be created through another hustle like crypto or drop-shipping, then it would’ve happened. It all started in February, a few days after I turned 13, the big number. I had finally become a teenager, and the first thing I wanted was money. Pure, solid cash. My cousin was in town for my birthday, and this was exactly around the time of the YEEZY 350 V2 “Bred” Release. These: 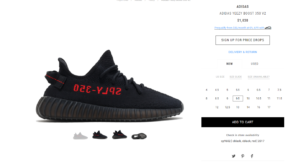 Yep. Your eyes aren’t playing tricks on you. These $220 shoes fetch over $1000+ on the aftermarket. During the drop, my cousin had never gotten past the splash page, even after waiting over 5 hours on it. I was so confused as to why he would even waste 5 hours trying to get a stupid shoe.

Until he told me their value.

I was extremely intrigued, and for the next couple days, I would find myself spending hours researching about sneaker reselling, and creating myself a twitter account for sneakers.

On February 20th, 2017, I had 2 girls in my class approach me asking if I was able to get this new makeup item that was releasing, the Kylie Cosmetics “Kylighters”.

These were sold at a retail price of 20 bucks. However, on eBay, each highlighter would fetch prices ranging from $50-80 depending on the color. From there, I knew I had to cop. So I paid my dad $50, and asked him to use his credit card to try and check out.

Fortunately, I was able to cop 2 of them, and I flipped them the following week for $50 each 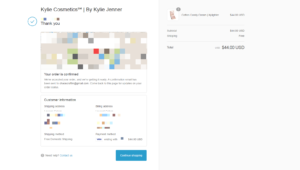 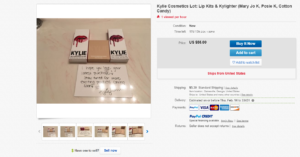 From there on, I had doubled my money and amassed $120. What a good start!

With that, I was able to secure a Supreme X Rap-A-Lot Records “Geto Boys” Tee, which I then flipped for $80. 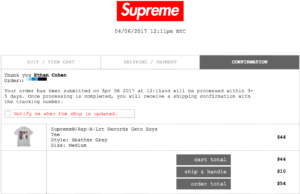 With a total of $160 compared to the $50 I started with, I realized how easily I could make this simple business grow. So I continued. Palace Skateboards had a drop, and with exactly $160, the money I had made from previous drops, I took a risk and used it all on a “Skeledon” Hoodie. I was able to easily secure it using autofill, and then I flipped it for $230. 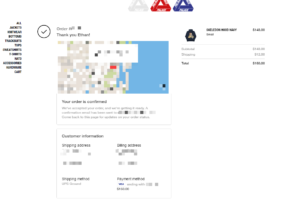 I was now at $230. I had made $180 off of this in just a few days! It may not seem much compared to how much I’m making today, but trust me, for a 13 year old kid, that was a LOT of money. So I continued, and it came time for the next YEEZY 350 V2 drop, the cream whites. I woke up bright and early at 6 in the morning, and took nothing but Ls all day, until it was time for adidas. I had not lost hope yet, and so I stayed in the queue for 3 hours. 3 hours, until I finally got past the queue. I was so happy, and I bolted through checkout, and secured a pair of size 9 cream white yeezys. Finally, things were really starting to pick up pace. I flipped those for $400, and continued buying and selling on drops. No need to go into detail, but I ended up with about $1500. From that, I bought myself my first bot. HeatedSneaks. It was a HUGE mistake. The bot flopped, and never worked. Luckily, it was only $70 so I didn’t really take much of a hit. I then bought ANB_AIO. The bot worked alright, and I was able to cop a few things with it, but nothing much.  After that many failures, I was ready to give up. Until Dashe, a shopify bot, came out. On the FIRST ever drop of 2.0, I saw the hype around it and somehow, I got through queue. But I didn’t cop – out of fear. Fast forward a few months, I had made a little more $$ and I was at about $2000. I bought dashe on a restock, and that was an amazing decision. The bot worked WONDERS. I copped  3 zebra yeezys on the restock (not nearly as much as I do now), using the locale jig, if you’ve heard of it, pretty much, it was a splash bypass, and it was by accident! I was actually in France at the time, so it let me do it and I had no idea why I got past splash so many times, but I copped enough to reach about 5,500. Meanwhile all of this was happening, I found out about cook groups. This was the very beginning of them, and so I decided to create my own. I named it, Haste. At first, I was charging $35/month for access to the slack chat, and I had about 30 members. I was using a public software to run my monitors, and I was making a consistent $1000 every month. Long story short, after about a year of continuing this, I scaled haste through twitter to about 100 members, at $40 a month on discord. This was about right after the Blue Tint release, my first ever “cook.” I had secured 13 pairs, through taskbot w/finishline mobile, adidas, and yeezysupply. So, I continued scaling haste, and ended up doing a deal with AMNotify. That blew me up, and I went from around 600 followers 2500+, and that one day of the shout out, I was able to sell $8000 worth of memberships. Thanks for the boost, Amar! From then on, I was contacted by PayPal and told I needed to create an LLC out of it to pay Taxes. So I talked to my parents about it, and they were very impressed. We went on and created the LLC, and that’s when everything started going up. Anyways, I scaled haste little by little, and then the summer of 2018, I decided to create a bot. I called it, CLI Bots. Now, I didn’t know much about maintenance of a bot, but I taught myself how to code through YouTube and I sold over $20,000 worth of this bot. In as little as 2 weeks. The bot worked great, it was a mass entry raffle bot, and it copped about 10 off white prestos and profited users over $7,000. But at the time, I had gotten into a little “beef” with the creators of another bot. Long story short, those people got jealous, and hired a hacker to hack the authentication server, spam our discord, and pretty much screw up everything. This was a HUGE fall for me, and really hurt the brand. But I never stopped. I was forced to refund the $20,000, and I did so, but about 1.5 months after what happened. At this point, everyone, I repeat, everyone thought and accused me of being a “scammer”, even though I had refunded mostly all of the users! I was in deep trouble, and had lost a lot of money doing so, but, the number one thing that kept me going was that I knew that this was just a small period, and would be just a small hit, but would never take me down. It was the determination that kept me going, and after a few months, I was starting to get back on track. I was up to 200 members paying me the fee of $40 per month, and they were all satisfied. Ever since, I have continued and done nothing but scale the company through advertising, youtube, and more. The one tip I’d say to people who are looking to start is that you have to be patient and determined. There will always be ups and downs, but if you work hard and keep trying, you’ll get what you deserve. If you have the right mentality and mindset, you’ll always end up on top. This happened around 5 months ago, and look at me now. I’m prospering more than ever, advertising with celebrities, selling to NFL players, and closing thousand dollar deals every day. 30 minutes ago, I secured a pack of shoes, that only 8 exist in the world, and I’m continuously making thousands of dollars every month. The business is constant, and the work is too, but if you have the right mentality, you will always end up on top.

So, thank you so much for reading my story. I hope that you learned a little something about me, and If you are in a little hole right now, NEVER, EVER, give up. If you ever have any questions or would like to learn more or talk to me more about my story, here’s where you can contact me. If you are part of a news network and would like to cover, contact information is also below

Work hard, and never give up. That’s all you need to know to become successful. 99% of all businesses end because the owner gave up on his dream. 99% of those people end up working a 9-5 job, being miserable for the rest of their lives. Don’t be like those people.

This story is exactly WHY I created Haste. I want to help people not have to go through the mistakes that I did, and I want to help YOU accelerate your sneaker earnings.

That’s it. Now go on and pursue your dreams!

To all who need to prove the authenticity of this story, I’ll update the blog with Tax Return info once we receive :))